The Qwuloolt Ecosystem Restoration Project restores ecohydrologic structures and processes, which will have positive feedbacks with each other as restoration proceeds. As an example, when natural hydrology (process) re-establishes through tidal inundation within the project area this will foster sediment deposition, which in turn will provide the substrate and seed source for native vegetation re-establishment (structure), which in turn will provide shade; increased habitat complexity, quality, and quantity; and, nutrients to the estuarine ecosystem. Eventually, native vegetation establishment will in turn increase site topographic complexity and foster channel-floodplain connectivity (process). Constructed elements have been the responsibility of the Tulalip Tribes and the US Army Corps of Engineers and their respective contractors.

The first phase of site work comprised stream channel and upland re-contouring, wave attenuation berm construction, and native vegetation restoration work. Over one and a half miles of stream channel in lower Allen and Jones Creeks were restored to their natural alignments by December 2012. In addition, interior site work included the filling of relict agricultural drainage ditches as well as excavating additional channels to facilitate natural tidal function. The construction of the new outlet channel connecting Jones Creek with the inboard side of the Ebey Slough levee was completed in August 2013. The construction of wave attenuation berms began in 2012 and was completed in August 2015.

The majority of native vegetation planting along the eastern and northern perimeter of project area was completed in 2012. Seven and a half acres of native vegetation have already been planted along the northern and eastern perimeters of the project area. Further native plantings have occurred on the wave attenuation berms, and will be augmented in autumn of 2016. Three stormwater filtration ponds have been constructed to the west of the setback levee to improve the quality of stormwater runoff coming from the nearby industrial park. Sealing of the three tidegates occurred in October 2015 at the southwestern end of Jones Creek and assisted in the final step of restoring natural hydrology to the site.

The process phase of restoration implementation, the most important phase, involved the hydrologic reconnection (return of tidal inundation) of the Qwuloolt site. Construction of a 4,000 foot setback levee on the western edge of the project area, in order to protect adjacent private and commercial property, was completed in 2015, with most of the work having been completed by November 2014. This structure afforded the opportunity to breach the north Ebey Slough levee, as it protected critical infra-structure to the west of the project area (industrial park and wastewater treatment plant). Once the western setback levee was completed, the southern levee in the project area (along the northern edge of Ebey Slough) was breached in late August 2015, allowing saline and fresh water to mix within the approximately 375-acre marsh. Estuarine water circulation has provided for natural hydrologic processes that sustain salmon and wildlife, as well as facilitate the transport and deposition of sediment and seeds for successional native plant restoration. 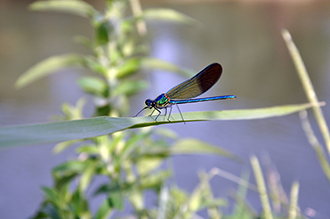