The Qwuloolt, meaning "marsh" in the Lushootseed language, is located within the Snohomish River floodplain approximately three miles upstream from its outlet to Puget Sound.

The Snohomish River watershed drains 1,856 square miles of the western Cascades and is the second largest river basin draining to Puget Sound. The watershed’s three major rivers, the Skykomish, the Snoqualmie, and the Snohomish, support significant runs of coho, Chinook, chum, and pink salmon; as well as steelhead, cutthroat and bull trout. River flows carry sediment downstream and deposit rich, nutrient-laden sediment in the river’s delta. The deposition of these sediments coupled with the erosive power of the river helped to form the estuary’s 19.5 square miles of marshes, forested islands, distributary sloughs, mudflats, and connecting channels. Tides influence the Snohomish River as far as 20 miles upstream from its mouth, along with historically influencing the Qwuloolt area. The balance of salt and fresh water as mediated by tides and river flow determine the composition and diversity of plants and habitats found in the estuary.

Today, only 17% of intact estuary area remains in the Snohomish River delta due to extensive diking and tide gates which have cut off the main channel and its distributary network from its historical floodplain. As was the case with much of the Euro-American agricultural and economic development in estuaries throughout North America, levees were constructed along Ebey Slough, linear drainage channels were constructed, and tide gates were installed at the mouth of Allen and Jones creeks in order to create grazing and crop land. The levees and tide gates prevented tidal flows from reaching the floodplain, which drastically altered hydrology (such as water quantity and quality) and brackish water-dependent vegetation within this ecosystem, thereby changing the wildlife and fish assemblages within this area. Most notably, these built elements have restricted anadromous fish species from utilizing critical spawning, feeding, and rearing habitat and effectively disconnected upstream spawning areas in Jones and Allen Creeks from marine waters.

The project has returned natural hydrologic processes to the ecosystem and resulted in a re-inhabiting of the site by native salmon, wildlife, and plant communities. 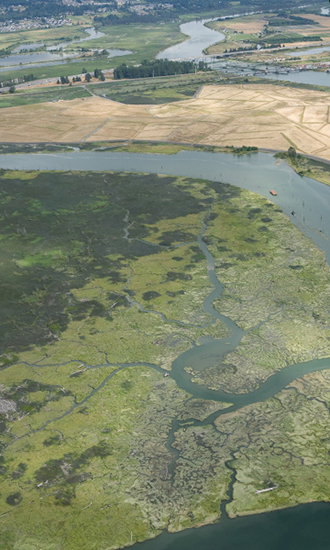